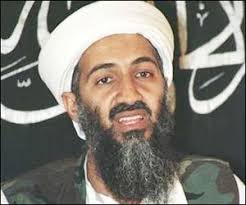 1- How does this reduce the long-term deficit?
2- Of course Obama knew where to find Bin Laden, after all, Obama was born in Pakistan.
3- It certainly took Obama long enough.
4- This is just another example of Obama using 9/11 for political purposes.
5- The Obama administration has now killed a man who was living in a mansion, this is obviously class warfare.
6- Obama sent a lot of troops and planned a rather long mission to finally get Bin Laden when all he really needed to do to kill Bin Laden was provide him with Obamacare.
7-  Great, now all those that were devoted to getting Bin Laden are out of work, way to increase unemployment Obama.
8- Yes, killing Bin Laden is an important accomplishment, but more importantly Obama, why won’t you present your college transcripts?
9- Clearly the death of Bin Laden is a reason for Obama to reach out to the American people and lower the corporate tax rate.
10- Why has Obama yet to thank President Bush for making this all happen?
Logging In...